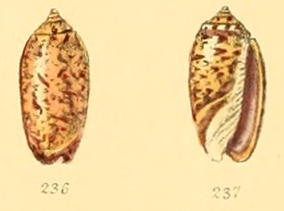 Although it is generally accepted that the species was not recognised as being distinct from Oliva oliva (Linnaeus, 1758) until the early 20th century. Bridgman (1905) apparently was the first to notice and promote the distinctness of the two. Bridgeman's article, however, has clearly been overlooked/neglected for almost a century. In contemporary literature, the species is regarded as a valid one by all authors. RV 6968a. Tonga, Motutapu, on sandtrails before sunset. Scale bar is 1 cm.