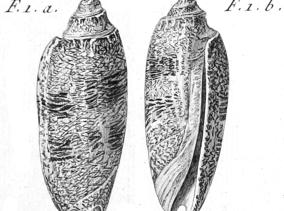 Distribution: Temperate Northern Atlantic realm. Warm Temperate Northwest Atlantic province (Florida,north of Palm Beach County on the east coast and not south of the Marco Island area on the west coast. It is encountered as far west as Texas in the northern Gulf of Mexico and as far north as North Carolina along the Atlantic coastline of the US)

A large (reaching a maximum shell length of around 80mm) intertidal to shallow sub-tidal species. Its occurrence in Mexican waters of the northern Gulf of Mexico is unknown.

It is the official state shell of South Carolina and the type species of Americoliva.

Fully mature Recent specimens of this subspecies can hardly be confused with any other. Its large size (up to c 80 mm), its telescopic spire and shell shape readily set it apart from its congeners. In southeast Florida, it may be confused with O. bifasciata Küster, 1878 (a species commonly collected in the past from the scallop dumps). In northwest florida it may be confused with Americoliva bollingi choctaw Petuch & Meyers, 2014. Another close look-alike is O. circinata Marrat, 1871, a species from Brazil.

Oliva maya Petuch & Sargent, 1986, from Yucatan, Mexico, is very similar in pattern, size and plication structure and is here considered to be a second subspecies of A. sayana.

The intra-specific variability of this subspecies was documented by Krisberg (2006).